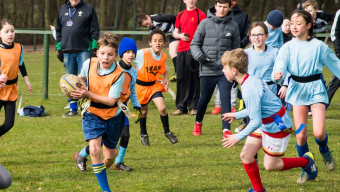 Skyswood entered three teams into the Sports Partnership Tag Rugby meeting last week. The ‘A’ and ‘B’ team both won all four of their matches, defeating larger schools such as Wheatfields, Fleetville and Garden Fields.  The ‘A’ team also beat St Peters, whilst the ‘B’ team defeated Bernards Heath ‘B’. Our ‘C’ team were also matched up against ‘C’ teams from the larger schools, playing Fleetville ‘C’ in their first match, and then coming up against Bernards Heath, Wheatfields and Garden Fields (all three-form entry schools.) Our children thoroughly enjoyed the day and all three teams played some tremendous rugby. Thank you to Miss McAlister, Mr Oswin and Mr Collenette for coaching the children and supervising the teams on the day. Thanks also to Mr Barnett for taking some fabulous          photographs.