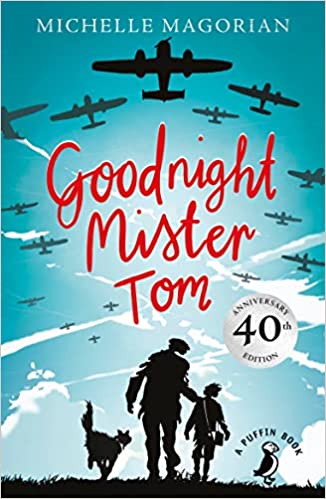 Year 6 have been reading Goodnight Mr. Tom. They have imagined and written the scenes in which Willie has to leave Tom and return to London, including dialogue between Tom and Willie.

Here are some excerpts from their writing.

The next morning Willie tiptoed down the stairs and sat at the dining table. Whilst waiting for his breakfast, there was an awkward silence between himself and Tom. After a while Tom placed down his bacon and knelt down beside him and said,

“Did you sleep okay?”

Willie said nothing, he stared at his breakfast deep in thought, whilst poking it with a fork. Tom left the room with a newspaper in his hand. He sat down in his armchair, Sammy came to find him and he lay on his feet resting his chin on his paws. The next morning Willie had been so upset he had made no eye contact with Tom or anyone else in that matter.

Willie froze ’W…what do you mean?’he murmured. He suddenly bolted for the door.’Waite’ Tom shouted after him. But it was too late. He heard the door slam behind Willie. Tom flopped into his dusty,old armchair by the fire. He felt weak and defeated. He knew he had to give Willie some time alone, it felt like only yesterday that Willie arrived and now it was all over.

Willie froze. He wouldn’t have believed Tom but the grave look on his face told him he wasn’t lying. Then the panic set in. The nauseous feeling overwhelmed him whilst Tom walked over to him quietly. “Willie…,” he said gently, but Willie didn’t want to talk. He stood up instantly and swiftly climbed the ladder leading to his bedroom whilst trying to hold back the flood of tears that he knew would come out eventually.

Once at the top, he slammed the trapdoor behind him leaving the downstairs of the cottage in complete silence. Tomy let out a heavy sigh and a single tear fell from his eye; the first tear since Rachel died.

The deafening silence was continued in the cart, with only the occasional cough of Willie from the lack of breathing or the huff of Dobbs pulling the cart. Sammy lay miserably by Tom’s feet. It only took 15 minutes to arrive at the station. They both clambered out at opposite sides whilst Sammy buried his head in his fur. Willie gloomily limped to the platform beside Mister Tom. “I’ll miss you boy,” whispered Tom.

“I will miss you too,”choked Willie. He stepped onto the train.

“Goodbye Mister Tom.” Tom waved, a singular tear rolled down his cheek. It was the first time he’d shed a tear since Rachel died. Willie bit his lip trying to hold back tears. Then the doors closed and the train started moving. He decided he’d take a seat next to the window, facing a tall shady man. Willie pressed his face up against the window. No more Weirwold, no more Mister Tom, It was back to discipline and endless chores. He cried until he drifted off to sleep.

Willie sighed as he climbed aboard the train. A soldier greeted him and gave up his seat for him. Willie stared dejectedly out of the window. He felt the same as when he arrived there; empty, defeated, both times because his mother was adamant. This made him pout even more. The train started off slowly.

“Goodbye, William!” said Tom sadly “You’ve changed my life! I’ll always remember you!” Willie forced himself to look away. He couldn’t believe this day had come. He’d half hoped it never would. But he knew it would. He felt like a large part of him had been taken away.

They arrived at the station half an hour later – they slowly walked in. Willie saw a telephone box in the corner; a crimson bench beside it. It felt like yesterday when he was on the train coming to Tom’s house. He remembered the billeting officer beside him.

He saw a big clock in the center of the station and noticed it was 11:30. It was half an hour until he would go. He felt sick. He looked up at Tom and whispered “I will really miss you,” Tom looked down at Willie then he knelt down beside him and muttered, ” You’ve changed my life forever William.” Willie looked around the station and saw a group of soldiers laughing and joking around. He saw a great puff of steam in the distance. He heard the noise of the train grow louder and louder. The old steam train came into view ; the steam filled the station.“Don’t forget to write letters,” said Tom and a tear ran down his cheek (his first tear since Rachel died.) Willie nodded and went towards the train casting glances at him all the way. He sat down next to a window and saw Tom disappear into the distance.

Willie woke up bright and early the next morning and he stretched his arms. He reluctantly stumbled out of bed and shuffled on his brown slippers. Climbing down the stairs sizzling bacon greeted his nose. Wille sat up at the table.

“Eat up boy we have a long journey ahead of us” Tom exclaimed, “You’ve packed all your stuff?” he asked, trying to be subtle.

Willie looked at him blankly then shrugged his shoulder and carried on poking at his breakfast.