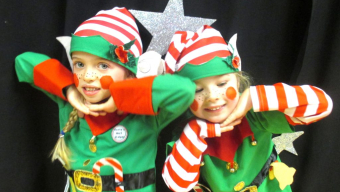 Our infants shared the perfect Christmas recipe when they performed their Christmas play earlier this month. The Christmas Recipe starts off with Santa and his elves making a jolly appearance. A touch of Santa’s magic goes into the pot, along with presents, snowflakes, angels, shepherds, sheep, stars and wise men. That vital final ingredient is then shared through the appearance of Mary and Joseph with the Baby Jesus. The whole story is narrated beautifully, with a team of narrators joining up with cuddly cats and delightful dogs to lead us through the story. There was plenty of humour throughout the show, with cheeky robins, a charismatic turkey and the most impressive Nativity donkey  for many a year.

The children worked together wonderfully to achieve a very polished  performance, with several catchy songs that showcased the characters, and a memorable verse delivered by the Three Wise Men.. Three of the songs: ‘We want Robins,’ ‘Snowflake Serenade’ and ‘Gift of Love’ will also be performed by the children at the Sandpit Theatre’s 15th Anniversary Concert. An Infant Photo Gallery for ‘A Christmas Recipe’ has been included on Page 2.

Answers to The Final Lockdown Quiz!

Over a Hundred Spirits Flying!